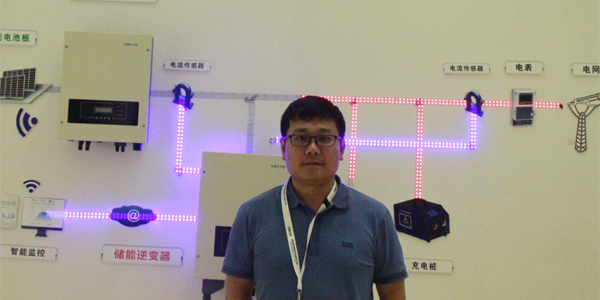 When the boost of PV gets in the way of reality, operator tried to establish the economical scale of “solar + energy storage”, to lower the price to the competition level of traditional power generation method, how to match PV power storage also has become the new hot spot of industry.

“In the next three years, there will be the window period for PV power storage.” Shenzhen SOFARSOLAR Co., Ltd. (hereinafter referred to as “SOFARSOLAR”) Vice president David Zhong said that with the decline of battery costs and gradual mature of associated industries, there would be an increasing number of requirements of PV power storage in the future.

As the data shows, the shipments of SOFARSOLAR was up to 1.5 GW in 2017, growing 5 times; it reached 400 million yuan in sales, it ascended 400% year on year. With the establishment and use of new factories which occupied 100,000 square meters, the capacity of SOFARSOLAR has amounted to 4GW, ranking firmly at the forefront of domestic string inverters group.

In recent years, the PV power storage market begins to spring up, inverter enterprises start to focus more attention to this emerging market, about “How to regard the development of prospect in PV industry and industrial production? What are the inspirations for the layout and actions in SOFARSOLAR power storage area?” For these questions, OFweek gave an exclusive interview to vice President of SOFARSOLAR – David Zhong (QIZHENG ZHONG).

The transcript of the interview is as followed:

OFweek: What products did SOFARSOLAR show in SNEC this year? And what are the features and advantages of these products?

David Zhong: The second generation model in medium power type was shown in SNEC, the inverters are divided into 20, 25, 30 and 33 these four different power ones, according to domestic market conditions recent years, we found that the market demand of these models are more concentrated, during the process of specific application, we also unceasingly improve for models and application solutions, we also optimized the questions that peer companies meet with in a mean time, to stable the product performance, to synthesize the function. This allows to adapt to demands under the different application scenarios.

The advantage of these products lies in the higher power density. Secondly, if the power is too low or the breakdown occurs in each group, its hard to detect quickly, the products of SOFARSOLAR are added the RV scanning function, it is easy to find out the problem part, it helps find out problems quickly and solve the problem soon. SOFARSOLAR is one of the few domestic string inverter enterprises that can solve the resonance problem because of excessive slope during the process of network connection.

It has wide range of voltage, it can be done from 230V to 960V. Besides, the monitoring method is flexible, compatible with WIFI, RS485 and a variety of connection ways, in general, the product performance is stable, but also the cost performance is high, the higher the speed of the domestic market development, it puts forward new requirements to the cost.

OFweek: The PV industry is developing continuously and the demands of the market becomes increasingly strictly. What kind of performance in inverters do you think will have a good future? What innovative ideas does SOFARSOLAR have in this perspective?

David Zhong: In terms of inverter in the product itself, performance stability is very important, inverter occupies about 20% in the cost of whole system, but it undertook the most dirty and tired in a whole system. If the inverter is unstable, the whole system will be seriously affected. On the same stable premise, your functionality and performance should be able to meet the requirements of different application scenarios. Especially under the trend of increasing voltage, the design requirements will be higher on the same limited PCB board. Another trend is the power is increasingly higher, the size is increasingly smaller, and there should exist cost advantage.

Cost advantage is reflected in the materials cost, development cost, manufacturing cost and failure rate will also affect your cost, so enterprise should add on the function of the inverter, do subtraction on cost.

SOFARSOLAR is a subsidiary of SOFAR group, which was established in 2007 and is the largest provider of on-board communication management system business in China, with a market share of more than 10%. Since 2013, the group decided to enter the new energy industry, the representative product is string inverter, from the current policy, market demand and the company’s own strengths, doing micro inverter is the direction. At present, the company has a research and development team of more than 100 people, there are more than 10 years of product r&d experience, the investment accounts for more than 10% of sales.

At the same time, SOFARSOLAR, HUAZHONG university of science and technology and other famous domestic universities reached cooperation in production, study and research, which also injected vitality into the enterprise’s continuous research and development.

OFweek: at present, “PV + power storage” has become the next development outlet of the industry. What market opportunities do you think the combination of photovoltaic and power storage can bring? How is your company’s layout in this area?

David Zhong: Power storage is a highly potential market, but for now, if the gap of peak valley price is less than 0.8 yuan, it is difficult to control costs, the cost of the power storage battery is restricted by the cathode upstream materials, the declines are limited, it is also difficult to promote widely in a short time.

The direction of “photovoltaic + power storage” has been concerned by many inverter manufacturers. SOFARSOLAR began to pay attention to the photovoltaic power storage market several years ago. At present, SOFARSOLAR develops products for households power storage of cluster, and is the first enterprise in China to develop AC coupling power storage inverter products. Compared with ordinary inverters, AC coupling inverters can improve the existing photovoltaic system and build a new energy storage system. At the same time, it can also be compatible with other brands of inverters, other power generation systems, and multiple battery types (lead-acid batteries, lithium ion batteries). Its internal topology structure of LLC, has the security isolation, such as high efficiency and reliable characteristic, dual control (DoubleDSP) plus intelligent monitoring (ARM) makes the inverter realize the intelligent management, it also can be monitored by the APP. This product has been applied in many foreign countries and has shipped tens of thousands of units in total. The energy storage technology has also won the recognition of domestic and foreign experts and scholars, and won many awards.

As the price of photovoltaic modules is lowered, the cost of the whole system is reduced, and the phase of affordable Internet access will come soon. “home photovoltaic + power storage” is the future development trend.

We will not only do household power storage, but also commercial power storage. In the second half of the year, SOFARSOLAR will also launch 10kw-30kw power storage products. We judge “pv + power storage” is bound to be an important future direction, along with the decline of battery costs, the photovoltaic power storage requirements will be increasingly bigger in the future, the next three years or so , the window period of “photovoltaic + energy storage” will come. At present, SOFARSOLAR is also planning to make the products of the adaptive storage power station, which can be used for the power plant’s frequency modulation or similar products of PCS pure storage power, all of which are in the planning.